You are here:
Cybersecurity Tips

The most basic fact of fileless malware is that unlike other malware, it does not have a footprint. It uses built-in tools from the operating system to make the attack a part of the normal functioning of the system. Without using traditional executable files as a source of entry into the system, fileless malware often hides in the memory or places where it is difficult to detect. From its hiding point, it directly targets RAM or joins other attack vectors like ransomware or spyware to accomplish its attack. As it writes on RAM and not to the disk, it leaves no traces of its existence and thus cannot be detected by antivirus software.

Cybersecurity is on high alert due to rising invisible malware attacks

Carbon Black had shocking figures on fileless malware attacks when they interviewed security researchers [1]. The glimpses from the interview are –

Most common types of malware attacks were:

A report from SentinelOne shows a rise in fileless malware attacks over ransomware attacks in the first half of 2018. [4] 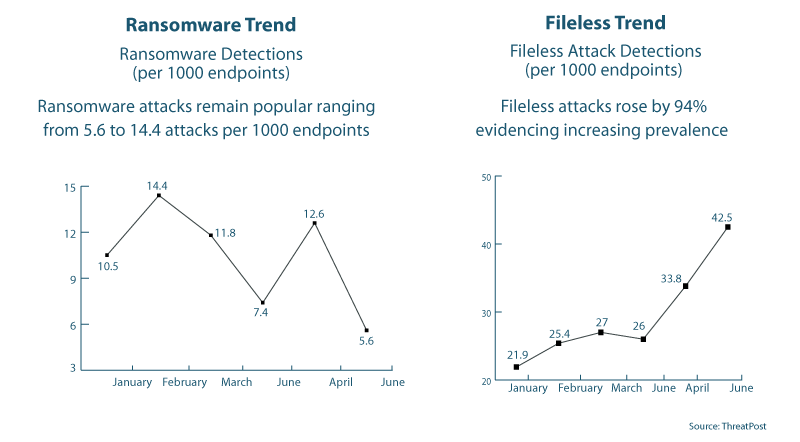 Further, fileless malware is contributing to 42 attacks out of 1000 endpoint attacks. It may not take much time for this malware to grow beyond enterprise networks to impact everyone.

Fileless malware is only becoming more sophisticated as attackers are now placing a script in the registry. This script reinstates the malicious code even though the machine is powered down and restarted. Malware manufacturers are also developing techniques that can utilize data encryption and ransomware. [6] If successful, these attacks can be devastating.

How does a fileless malware attack happen? 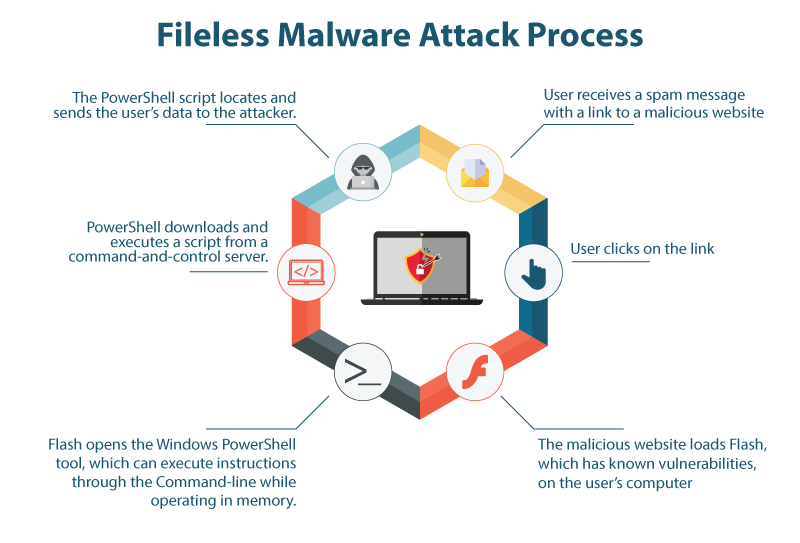 On the whole, there is no malicious program or content that you can find installed separately on your hard drive, and this is what makes fileless malware a tricky attack to handle. Once the malware is in your system, it can abuse legitimate administration tools and software to gain privileges and multiply. Another important observation here is that the attacker doesn’t have to worry about sneaking a malicious program past the antivirus and security software. This is because the line alterations cannot be detected by automated sensors.

As the cybersecurity industry is becoming more responsive to exploits, the lifespan of fileless attacks is reducing. The simplest way to defend your system from fileless malware is to keep your software up to date. This includes all the basic software applications like Microsoft 365 Suite, which comes with an upgraded package on Windows Defender that can detect irregular activities.

Another way is to counteract fileless attacks to address the entire threat lifecycle. The multi-layer defense strategy is again a good practice as it enables you to investigate every phase of a campaign before, during, and after an attack.

A successful fileless attack is hard to identify until it destroys the target. The future of fileless attacks may be worse as attackers take steps to go beyond evasion and register to solidify existence after the system reboots.

With this article, we have come to the end of the series on malware attacks. We are sure that the entire collection of the writeups would have inspired you to become a cyber enthusiast. If you are planning to make your career in cybersecurity, then you should join our online Bachelor of Science in Cybersecurity (BSCS) program or the Master of Science in Cybersecurity (MSCS). Both programs are completely online, instructor-paced, and two-years duration.

Are you looking to pursue a career in cybersecurity?

Talk to our counselors now!

CISO MAG study: 1 in 3 CISOs feel the biggest challenge of endpoint solution is its complexity
November 25, 2019

What Information Are Cybercriminals After and What Do They Do With It?
October 23, 2019