Industries That Are Most And Least Vulnerable To Cyberattacks

You are here:
Cybersecurity Tips

The repeated occurrence of various cyber attacks have thrown the entire world into a state of anxiety and have forcibly moved the discussion of security from the IT department to the boardrooms. In most cases, the attacker’s motive is either monetary or political, most often being the former. A study conducted by Akamai, a Massachusetts based cloud platform provider, has revealed a few observations of the latest cyberattacks. According to their report, the countries that were affected the most by cyberattacks across the world are as follows – [1] 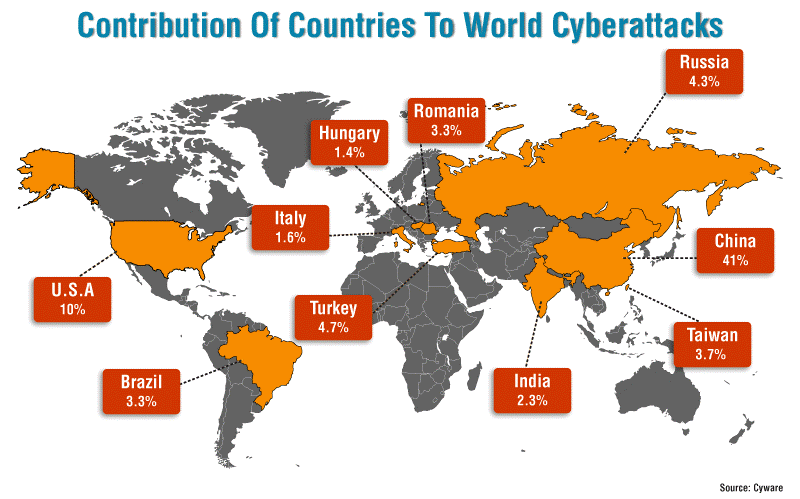 Some businesses are extremely vulnerable to cyberattacks because of the data servers and networks that they rely. This could result in financial loss to the businesses, damages to the system, and challenges to their credibility. With the growing dependency on technology, there are no industries or businesses that are safe from attack; the higher the dependency on online technology, the higher the scope of vulnerability. Therefore, industries working closely with online tools and technologies and are involved with personal information of individuals are more likely to face cyber threats than those which are less exposed to such detail.

Financial institutions and banks have now moved their data to cloud servers which have made them even more vulnerable to cyber threats. With the industry being an obvious target, as it deals with a lot of personal information of the users, cyberattacks are becoming more sophisticated. The NCC Group on global cybersecurity and risk mitigation has observed that there is almost a 400% rise in the number of security vulnerabilities in the finance industry! [2] The introduction of the online wallet has intensified the number of hacks by creating multiple entry points for cyber attacks. The attackers motive is to gain access to the credit card information, transfer funds, file fraudulent tax returns, etc. to create panic.

The healthcare industry is rapidly shifting from offline to online consultations and diagnosis. Other than typical clinics and hospital services, online healthcare offers various other services like providing doctors’ details, expert advice, consultations, references, etc. Healthcare has been marked as a major industry to experience cyber attacks in the last few years. FortiGuard Labs reported that healthcare has experienced an average of 32k intrusion attacks per day. [3]

Internet connected medical devices, like pacemakers, can also be compromised and thus controlled by perpetrators which can pose a huge risk to the patient’s life. Such vulnerabilities would become liability issues for the healthcare industry as a whole especially in a situation where neither the healthcare facilities nor their preparedness to deal with such compromises are adequate. Ransomware is another real threat to the healthcare industry, with 266,000 patient records already breached in June 2017 at the Pacific Alliance medical center located in Los Angeles. [4]

News channels and media agencies usually focus on larger cyber attacks on companies like Netflix, Bitcoin, Target, Yahoo, etc. They don’t concentrate on small or medium-sized organizations assuming that the impact of such attacks is less. What will be the consequence of loss if a business is hacked repeatedly? On the contrary, small businesses are frequently hacked due to the lack of effective tools, processes, people and fiscal ability to combat such cyber attacks. Research has also shown that small and medium sized businesses tend to take for granted that cyber-attack victims are from larger institutions.

IBM’s X-Force Threat Intelligence Index was used in the year 2017, to monitor the most notable malware shifts, key attack vectors and most frequently targeted industries. According to the study, institutions offering financial services happened to be the most attacked industry, where the attacks were primarily conducted by insider attackers. These are expected to spread over the franchise retailers in a couples of years and also distributed infrastructure businesses. [5]

Shadow Brokers, a hacking group, breached the NSA (National Security Agency) in 2016. [6] The breach was done to bring the focus on the practices of gathering intelligence through bugs in commercial products and not notifying the manufacturers of the software. The experts identified that the code though outdated was genuine and was used in producing the N.S.A.’s custom-built malware. This practice can be potentially dangerous to billions of software users.

The growing volatility of media has put the media outlets and websites in danger of cyber attacks. More than 51% of media and entertainment firms experienced a minimum of three cyber attacks since 2017, as revealed by Hiscox, the international specialist insurer. This finding is based on a survey of cybersecurity industry-leaders at U.S. media and entertainment firms conducted by Forrester Consulting and sponsored by Hiscox. [7]

Media and entertainment firms are vulnerable to cyber threats due to the extensive use of complex processes and high-profile products, and dealings with various government personnel of repute. Most commonly, the media and entertainment industry face the threats of phishing and malware attacks due to political reasons and not really for criminal or financial intentions.

The owners of the manufacturing companies are not really aware of the high risk of cyber attacks and hence they are more vulnerable to cyber threat. These organizations don’t practice adequate defensive measures to safeguard their data. The hackers can easily exploit the vulnerabilities of the manufacturing companies and can demand ransom money by holding their data hostage. They can also sell the valuable proprietary information to others for monetary benefit.

Hackers can gain control over energy networks and can cause widespread power outages. The energy industry is vulnerable to cyber attacks because hackers can control the energy networks from long or shorter distances. This gives them access to power grids, nuclear facilities, and power generators across the world. The Department for Homeland Security has warned the U.S. natural gas pipelines on the possibility of a threat of vulnerability to vital infrastructure by computer hackers. [8]

It was also observed in Oklahoma, that the wind-turbine facility could be easily hacked in no time. The researchers from the University of Tulsa were hacking the wind farms around the United States to demonstrate that it requires less than a minute of time to unlock the door and gain access to the servers. [9]

The new techniques of cyber attacks will be introduced by the attackers to make the processes vulnerable. If the security protocols are not in the place, then the breach of data will be the resulting outcome. Employee training or hiring of professionals in cybersecurity are the key elements to control the breaches.

Cybersecurity in itself is an entire subject and to contrivance it, one must have professional skill and knowledge. We have seen that cyber attacks are rising and only the regular practice of cybersecurity in organizations can overcome the vulnerabilities to a large extent, the need for qualified cyber training should be made mandatory.

If you are enthusiastic about learning information security, you can refer to our Bachelor of Science in Cybersecurity and Master of Science in Cybersecurity programs. Our degree programs bring the latest industry knowledge to the students, with a practical approach to learning through our virtual labs – iLabs. Our students also have the opportunity to earn up to four industry-recognized certifications with their degree.

To learn more about the programs visit the following links:

Bachelor of Science in Cybersecurity: https://www.eccu.edu/academics/bachelor-of-science-in-cyber-security/

Master of Science in Cybersecurity: https://www.eccu.edu/academics/master-of-science-in-cyber-security/

Alternatively, ECCU also gives you an option to pursue Cybersecurity Graduate Certificate Program in any specialization of your choice, To know more about the cybersecurity degree admission, course curriculum, duration, eligibility, etc – visit our website: https://www.eccu.edu/academics/graduate-certificate-program/

CISO MAG study: 1 in 3 CISOs feel the biggest challenge of endpoint solution is its complexity
November 25, 2019

What Information Are Cybercriminals After and What Do They Do With It?
October 23, 2019